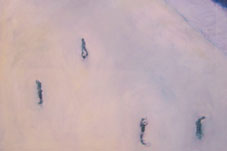 It must have been 1989 that a colleague explained to me that the fantasy of perfection at the core of his artistic being consisted of turning into a new species of travelling salesperson. It would be enough for him to have a briefcase for he could store all the other matters in his head; as for the stressful paper-work an office with a secretary would suffice. He himself had just given up his studio. Others e.g. van Gogh suffered their whole lives from the actuality of not having a real place.
Of course there were always spaces or rooms but they were to all intents and purposes borrowed for short periods. Van Gogh experienced this pattern his entire life and it did not stop him from painting a number of pictures every day and that in an old shed in Arles. Indeed probably it had to happen this way due to his presentiments of the short period of life remaining to him.
Cezanne in contrast preferred above all to work in the open air because outside he could best escape from and channel his own feelings of horror and rage through his paintings. The legend about him leaving pictures behind in a clearance in woods still lingers in some people’s minds. And sometimes at certain times of day and in certain light conditions, one can still see them in the forests around Montagne Sainte-Victoire, how they stand at their easels and patiently await the return of the master.
Cezanne possessed ateliers too such as his final one in Aix-en-Provence. A room, dark with high ceilings which he even sketched but it makes a prison-like impression built for the purpose of keeping the outside world at bay. But at that time he was getting on in years, and for sure he had already given up all hopes of being able to make this world his own.

Two others, Joseph Mallord William Turner and Caspar David Friedrich, likewise needed the seclusion of rooms with high ceilings so as to enjoy the best possible aspects of light, nature and vitality.
The former had himself bound to a mast on deck so as to internalise the roaring of the elements. Having successfully survived the storm and returned to his intensely personal painter’s lair, Turner then depicted his impressions in colours and brushstrokes painting the “Snowstorm” (1842). However, the picture failed to impress the critics of his era and instead shocked them e.g. „soapsuds and whitewash“. It was said of Turner that even half an hour before the opening of an exhibition, he could still be seen armed with a palette-knife and brush, perfecting his paintings; for him his studio was like a secure harbour in which he could give oceanic but tangible form to his fierce unruly imagination and inner drives firing his spirit and painter’s eyes.
Friedrich, the conscientious designer of the Romantic epoch, likewise needed only a little space so as to make his grandiose panoramas come to life. Nevertheless, in his work everything concentrated itself on precisely this space. Here the idea saw light of day, then came the planning, the composition, and after all that it was here that he painted the picture. He would decide on every step and every brush-stroke in his archetypal conceptualising on the journey from the idea to the realisation of the picture. This was inevitably linked to a specific niche; the atelier.
The “Wanderer above the Sea of Fog” (in his most famous picture) would never have even an opportunity to lose his way. Indeed he would never even be able to try it.
Then there is Gauguin, the globalist. He probably always had very few problems with the question of the inner and the outer: unsurprising because a South Sea island with the sky as a roof may well be an adequate replacement for a closed space provided that one has nothing against the perpetual swooshing of the sea, sand in paint, and is able – in view of naked and happy young women – to bring oneself to get busy on the mostly agonising craft that is painting.
In contrast with that, Picasso, the extraordinary, the all-entrancing naturally enough needed his own space on solid premises. Not only to work, to love and live but above all a place for his collections of trophies. Picasso’s atelier was always a place for self-staging, partly theatrical and partly a wizard’s cauldron, but throughout all that remaining the place where spirit and manual energy could fuse to create something.
Andy Warhol the all-destroying, all-using, all-distributing, all-copying; Warhol transformed the sacred chamber of countless generations of artists into what they had earlier used to be – in Egypt, for instance, about 3,000 years earlier or for Rembrandt in the 16th Century. Warhol created the modern workshop or factory with all of the achievements of the Industrial Revolution: exploitation of individuals, production line work, loss of identity to name some.
But the „Factory“ is of course the most resourceful and ingenious of all his artworks. The concentration, grouping, and implementation of the ideas and talents of many people via one individual can only be adequately compared to the construction of the pyramids in the Old Kingdom of Egypt, or the colouring of the Sistine Chapel in Rome.
It is absurd to conceive of Andy Warhol in a painter’s atelier with high white walls and light from the north; it would be as if one had forced Joseph Beuys to place all his installations in one location. The latter’s work is inextricably linked to the places where they were brought into being, and as a result he needed an atelier to accumulate and store energy. As a depot for ideas which were to be dedicated and implemented at a later date in various locations, circumstances and situations as required.
As an example of a present-day artist still hard at work, Anselm Kiefer’s workspaces grew in a ratio directly proportional to the enlargement of his formats for his pictures and projects; by now they have reached gigantic dimensions. What began at some point in an old school building, reached completion for the time being in the huge area occupied by a decommissioned factory premises. Yet further growth appears to be still possible as in particular the planned project between the Euphrates and the Tigris has still to be completed.

Others have grown old with and in their own studios. Lucian Freud in London, Emil Schumacher or Georg Baselitz in Hagen and Derneburg respectively (both in the FRG). And in case they don’t sink one day into the layers of colour, which they have piled up through their lives, it is to be hoped they will continue to stack it up for a while. (Unfortunately Lucian Freud passed away in 2011 and Emil Schumacher stopped stacking up his colours in 1999…)

In conclusion a dab of fiction can be permitted. The ideal atelier would look like this: a bit of South Sea, with many walls and windows; an exit somewhere when one cannot go on looking at it all; many nails so that one can hang what one wants (shells or so?); a large „Factory“ which above all can carry out the tedious tasks of making coffee, fetching beer, ordering pizzas, washing brushes etc. (if possible staffed by volunteers); the whole thing three km long, four km wide and about as high as the sky; of course freshly renovated and warm in winter, with numerous sun-tanned, half-naked, happy people with black eyes and hair, a bar at the corner, a cigarette – and money-machine, and most importantly:
no bed! Because – nobody sleeps here!