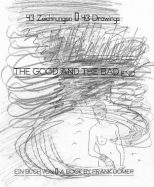 Fade and then return
At the beginning of the small series of works on paper, which were created in 1990, are children’s drawings of my son. These first five sheets were the starting point for an examination of abstraction and objectivity through drawings. Over-drawing and extensions developed out of the first works, which then, reacting to each other, meandered through the entire group of works.
Memories and shifts, blurring and illuminations. Clarifications.
Figures appear, objects, situations, landscapes, dream images. The motifs condense, dissolve and swirl.

If at the outset the drawings follow the requirements, from then on the input is increasingly pictorial. Long legs, high heels, short skirts and fragments of something creep along, suddenly appearing and disappearing in the structure of the sheets, seemingly coincidental and unsystematic. Later the corresponding models materialize. As if they were ordered from a catalogue, they emerge from within an increasingly wilder tangle of lines and strokes, and only a short time later, by dissolving and transforming, take on a new shape as an apple-tree. The tree itself dissolves afterwards into purely abstract structures. In its perception, however, when the described process is followed, the abstract form remains an apple-tree. For the perception there is no longer a difference between abstraction and figuration.

The formation process of the finished sheets follows a kind of guided randomness.*
A drawing reacts to its predecessor and forms the starting point for the following one. During the work on one sheet, the next one is beneath it and between them lies a sheet of carbon-paper. Through the pressure of the pencil, parts of the resulting drawing are transferred to the page below. Depending on the amount of pressure, this can be more or less strong and clear. Since relatively thick drawing paper is used, it is not a copy of the original drawing that appears, but a barely discernible shadow. This then forms the starting point for the next drawing.
This work can now react directly to what is already there, or can take an entirely new direction, which remains within the context of the whole series. The direction in which each drawing develops is always directed by the specifications, how the elements on the individual sheet combine together to a coherent, balanced composition. Broad black lines can form an important element, which attracts the eye of the viewer. In the next drawing they can pave the way for a view of a newly-emerging structure or a new element. Landscapes appear for example, in which figures or objects are present. The objects, landscapes or figures that are drawn „are constantly being added to, the allocation of a definitive meaning remains open.”** 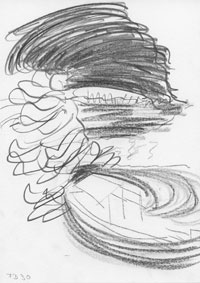 The drawing of a boat which appears in the middle of the book and which threatens to disappear into a whirl(pool) a few pages later, doesn’t seem to have been caused by a dramatic event, but is rather an outcome from the previous drawing. In this way drawings develop which can be appreciated for themselves and independently, but through their creative process can be merged into a series or a group of sheets, without however, a story being told.

For this reason it seems fitting that on some pages all objectivity is lost and makes way for abstraction. Form and structure are retained, and from them new figuration can emerge some pages further on. On every sheet the focus is on the drawing itself; its form and structure, the black, the white and the shades of grey.

The fact that the drawings in the form of a book can nevertheless be read as a ’story‘, is a result of the process of creation and their sequencing. Having been brought to paper within the relatively short period of three weeks, each shows on the one hand a consecutive development from its predecessor. At the same time something new is present in every drawing, which refers to the subsequent page. In addition to the concentration on the individual drawing, the work incorporates a gaze backwards and also ahead. In principle the book can be read forwards or backwards, and although no narrative moments create tensions, one would like to know how it continues on to the next page.

The title of the book is also based on the duality of viewpoint. There is a good end, the “happy end”, just as there is a bad end or a nasty result, and never one single event. They usually appear together and only vary in the individual perception of those affected or of the viewers. The attempt to consider things from the end can fail as easily as impulsively dashing off can. There can always be a good and a bad end, or good and bad can end. “It is always (not) right.”***

The decision to publish these drawings as a book over twenty years after they were made was taken for a number of reasons.

On the one hand, to me, they have not lost anything of their topicality.
On the other hand, over the last twenty years the possibilities for book production have changed dramatically, making it easier today to realise projects without having to involve larger or smaller publishing companies, something that simply would not have been affordable in 1990.

In addition, the works in this book have great personal significance. To me they are charged with the events of the year in which they were created. Twenty-one years after the birth of my son and German Reunification, I decided it was a suitable time to do something with the pictures from “back then”. Furthermore they are a constant reminder of the encouragement of one of my most important supporters, without whose partial purchase this group of drawings would probably no longer be intact.

Finally, the drawings are also an obvious metaphor for life nowadays: You always have to look forwards and back in order to understand a story.